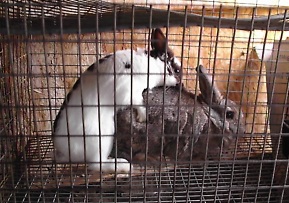 There are numerous ways to go about the actual breeding process, but they all, except colony breeding, fall along a continuum.  On the one end, you put the doe in the bucks cage and remove her after the breeding.  On the other end, you pose the doe and make sure she is stimulated and place the buck into position, lifting her hindquarters and pressing the buck against the doe, if needed. In other words, you do just about everything for them.   (In colony breeding, you allow a buck to live with a number of does for a period of time, breeding as many does as he is able.)

I prefer natural breeding in most circumstances.  I place the doe in the buck’s cage (never the other way around, since does can become defensive of their cage space).  It is important to watch constantly.  I have stepped away a couple of times, thinking that I was keeping an adequate eye on the pair.  Even though I thought no breeding had taken place, I was proven wrong by the dead litter on the wire 31 days later.  It can take an instant.  Watch constantly.

If all goes well, you will see the buck mount the doe from the appropriate end (although he may try several unworkable variations first), then the doe will lift her hindquarters, and the buck will pop off his mount, sometimes in a very dramatic and entertaining manner.  Some bucks are so theatrical!  Do not be concerned if the doe mounts the buck for awhile.  Generally, that shows an interest in the breeding and sooner or later, they get it right.  Also, you may see the pair circling each other for a period of time.  That’s normal, too.

If mating doesn’t occur within a few minutes or there isn’t adequate cooperation by the doe, I will flip out her back feet, raising her backend,  and put her into breeding position, keeping her there by lightly holding her head.  If that doesn’t sufficiently help, I may stimulate her vent and try to see if she will lift.  Generally, this is sufficient to get a breeding.

Occasionally, I intervene even more, pulling back loose skin or a heavy ruffle that seems to be getting into the way.  I’ve clipped thick fur that might prevent her from being stimulated.  I have sometimes had to reposition a buck to hit the target.  Occasionally, I have to return a buck to breeding position to keep him from wearing himself out on unworkable mounts (head, side,  over the tail).  Lifting the hips of the doe may also help if she’s not lifting herself.

When I have a buck that I am currently showing, I may select table breeding instead.  I prefer natural breeding because I believe I get bigger litters and better conception that way.  But I do not want to risk having a buck scratched or bitten or having his fur ruined during a natural breeding when a show is upcoming.

In table breeding, I check the doe’s vent just before putting her on the table, both to check for color and to begin stimulating her for breeding.  Then I place her on the table with her back feet flipped back and her rear raised.  I stimulate her vent again to make sure I am getting a lift.  You can just use your fingers to lightly press against her vent several times until you feel her lift, reaching around over the tail and between the hind feet. Then I place the buck directly into a breeding position and scoot him forward to make contact with the doe.  After breeding, I catch him to make sure he doesn’t fall from the table.

After breeding, regardless of the method I use, I check the doe’s vent to make sure the semen was deposited in the correct place.  If the mating actually took place, you will find her vent wet.  If you find a wet spot on her back or tail and the vent looks the same as before breeding, then the breeding probably did not take place.  Wait a few minutes and try again.

I rebreed after an hour to increase the number of eggs released to increase litter size.  As I breed does, I jot down the time of the first breeding and attempt a second approximately one hour later.  It’s now time to complete any records or labeling that you want to do.

Next Article: How do you know if your rabbit is pregnant?